The history of maple syrup

Do you know when maple syrup was born? The history of maple syrup traces its roots to long before the arrival of European colonists to the new world The indiginous peoples of what is now North America were already harvesting the sap of the maple tree and transforming it into syrup.

There are a fair number of associated legends, many of which even have animals as their main characters.  According to various stories, the first inhabitants of that vast land mass witnessed dogs, and even squirrels, licking the sap off of maples as it flowed from beneath the bark, and must have decided to follow the example set for them. Thusly did they discover that precious nectar. 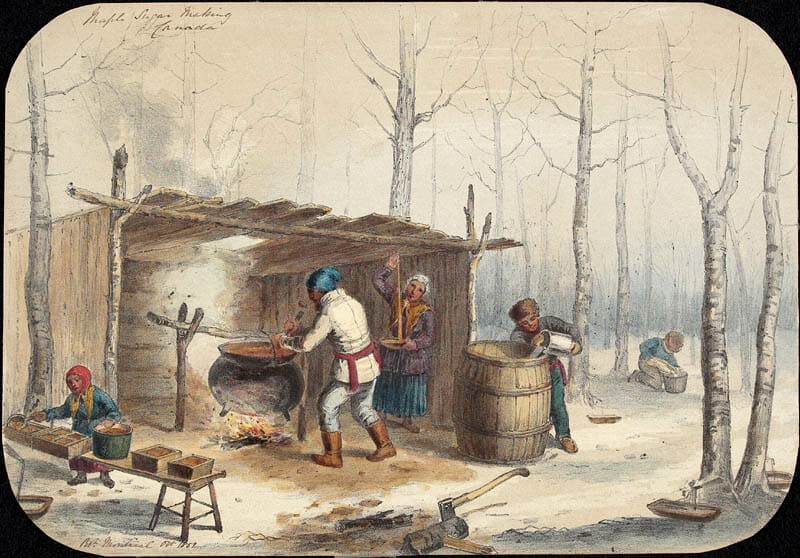 AThere is no shortage of mythology around the production of syrup, either. The most famous of these is the story that claims the wife of a tribal chief as the first ever maple syrup producer. One morning towards the end of winter, her husband, the chief, left his home to go hunting, retrieving on the way his tomahawk from the tree he’d stuck it in the night before.

The weather that day was hot, and before long, from the hole left by the chief’s tomahawk, there poured a stream of sap, which flowed down the bark and filled a container that was left at the base of the tree. The chief’s wife, believing this liquid to be purely water, used it to cook meat for dinner. The cooking process, of course, turned the sap into maple syrup, adding unexpected flavour to the dish. 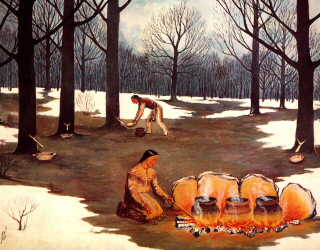 The exporting of maple syrup, especially to France where it enjoys popularity among the noble and wealthy classes, begins around the end of the 1700s and the start of the 1800s.

In the 19th century, thanks to the scientific advancements of the age, there are big changes in the methods of harvesting and production of maple syrup. Around 1850, iron vats were replaced by the much more efficient two-pan evaporators, halving the necessary cooking time.  Additionally, beast of burden were replaced by tractors for the transportation of the sap from the trees to the refinery.

Legends aside, the first methods used to harvest the sap called for a V-shaped cut to be made in the bark, and  a piece of wood inserted at the base of the cut. The sap would flow from this wedge-shaped hole into the container waiting at the base of the tree.

This sap would then be boiled slowly in earthenware pots by the tribeswomen, over flames situated beneath a roof made of tree branches (essentially a sort of precursor to the “sugar shacks” of Eastern Canada).

It was these first inhabitants of the area who explained to the first European colonists how to cut into the bark of the tree at the beginning of spring, harvest the sap, boil it in steel pots, and pour the resulting product into wooden moulds of various forms.

It’s important to remember, however, that until the early 1900s, the production of maple syrup was exclusively a family affair. It was only in the 20th century that a true commercial industry was born, in part because the early colonists were primarily interested in the fur trade, along with the harvesting of timber from the vast forests of this new land. During this time, maple syrup begins to spread, becoming more and more available in supermarkets. In the 1920s, a five-category classification of maple syrup was instituted.

In the 1970s, technological progress enabled producers to start using reverse osmosis machines to remove the water from the sap before it reached boiling point: in addition, larger and more functional storage containers began to be used, alongside preheaters to reduce heat loss. Subsequently, maple syrup production continued to evolve into the form it takes today.